I've been told DNS Traffic Control isn't possible on Infoblox TE-820 appliances as their performance is somewhat lacking. Is this true? I can't find anything in the release notes.

The only thing I can find in the release notes is that TE-820 appliances cannot be used as grid master.

NOTES: Infoblox does not recommend using the TE-820 appliance as a Grid Master in a Grid that
contains more than five (5) Grid members. In addition, running protocol services is not supported
on a TE-820 Grid Master.

We where in a situation running a 820 as gridmaster, running DNS and DHCP and RPZ, and ran into performance issues resulting in DNS outages. This was introduced somewhere after 8.0.x. At that time we ran 7.3.x (still supported, but after upgrading to 8.1.x+ we where confronte with this note in the release notes)

Apart from that I could not find anything in the notes that would disqualify a TE-820 Grid Member as being able to use DTC.

Yet, instead of giving us a price offer for DTC our supplier wants us to replace all our TE-820 by TE-825s :-(

This limitation would be reflected in the documentation from NIOS 8.3.0(Tentative) & above. Due to the performance impact, 825’s are advised instead of 820’s for the DTC feature. While you could use DTC with temporary license in 820 boxes today, you would not be able to get a permanent license for the feature. Just from one of the internal resources : 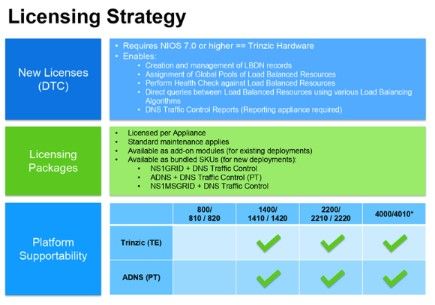 I understand your confusion as a customer, but this should reflect the documentation soon.