Reply
Topic Options
This is an open group. Sign in and click the "Join Group" button to become a group member and start posting.

The integration requires an additional connector installed on Carbon Black Response server, local RPZ zone(s) or ActiveTrust feeds on Infoblox DDI side and configure the connector as an external syslog server for RPZ events. 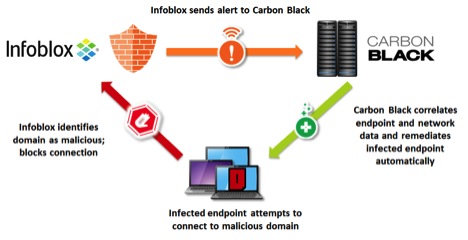 The Carbon Black Infoblox Secure DNS connector ingests reports (RPZ hit events) from the Infoblox Secure DNS appliance and correlates them against data in the connected Carbon Black Response server. The connector can then take one or more actions based on these reports, including killing the offending process from the endpoint, isolating the system from the network, and creating an alert for future followup.

Because of this limitation RPZ zones/feeds or RPZ rules should be configured to redirect endhosts to a walled garden site/blackhole/honeypot. In other words if RPZ returns NXDOMAIN (default action for the ActiveTrust feeds) or NODATA, Carbon Black does not receive a netconn event and this connector cannot correlate the activity against a running process on the endpoint. The IP does not have to correspond to a real host; a network connection event will be generated as long as the host attempts to contact the target IP, even if it doesn't exist or is unreachable.

This also means that DNS Data Exfiltration/Infiltration/Tunneling can be stopped on Infoblox DNS but Carbon Black Response can not correlate the DNS information with a process because no TCP SYN or UDP packet is send to a remote host.

The detailed step by step guide is available on the connector's github page.

The following videos demonstrate the integration.

Reply
0 Kudos
Turn on suggestions
Auto-suggest helps you quickly narrow down your search results by suggesting possible matches as you type.
Showing results for
Search instead for
Did you mean: