How I can delete dhcp leases from the database if csv import does not work?

I do have a distributed setup of infoblox appliances (4 of them).

Unfortunately my capacity report shows 348,000 dhcp leases which do not reflect my current state.

Most of them are abandoned some are locked to mac addresses.

scanvengers are not deleting them.

I tried csv import deletion but it does not work for dhcp leases.

How can I delete them so I empty my databases?.

at the moment all four of them are over 100% utilization.

Thanks for the help

aRe: How I can delete dhcp leases from the database if csv import does not work?

Did you try enabling DHCP lease scavenging which can help you to automatically delete free and backup leases that remain in the database beyond the number of days or weeks that you specify. It can be enabled as below. 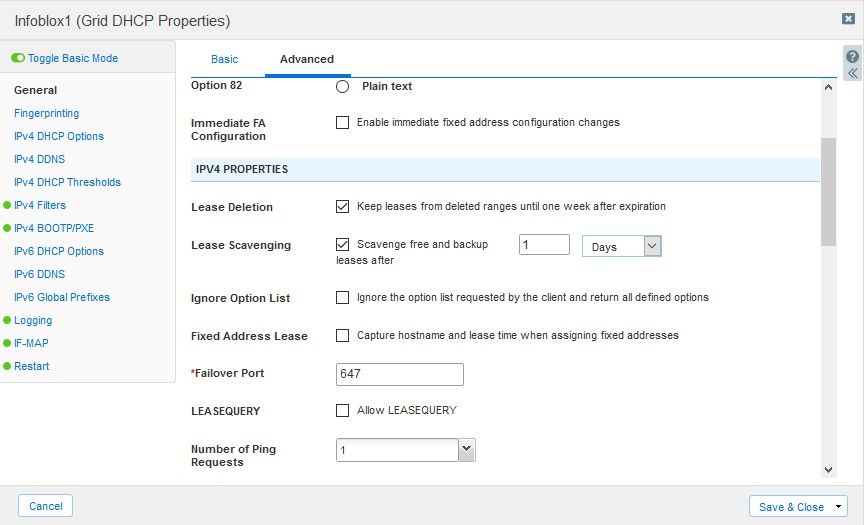 IP addresses are marked as Abandoned for one of two reasons:

The abandoned IPs will be reclaimed by the DHCP server only when all the free IPs in the network have been leased out. After all the free IPs in the network are leased out, the Infoblox DHCP server will try to reclaim the Abandoned IP's. To reclaim an abandoned IP, the appliance will again send an ICMP echo request to each abandoned IP Address in turn. If it does not get an echo reply, then the DHCP server will mark the IP as free and give it to the client that is requesting an IP Address. If the client receives an ARP response as detailed above, it will send a 'DHCPDECLINE' and the IP will again be marked Abandoned

These abandoned leases can be fixed from your end by checking the clients in concern from the network level.

with your help  delete all the olds ips in my infoblox

my name is Paolo and I have the same problem.

I have done an export about the Capacity Report, see below:

At the moment I'm not using dhcp service but only dns.

Could you help me to resolve the problem, ?

Many thanks for your time.